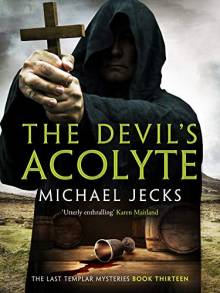 When the devil comes calling, all you can do is pray.

Amidst the myth and folklore of Tavistock, one tale above all others strikes fear into the hearts of the town's inhabitants - that of the murders on the Abbot's Way. A young acolyte paid the price for stealing his abbot's wine when the devil himself led him to his death on the treacherous Devon moors.

Now, in the autumn of 1322, it looks as though history may be repeating itself. Abbot Robert has found his wine barrel empty, and a body has been discovered on the moors.

Sir Baldwin Furnshill and Bailiff Simon Puttock are called upon to investigate but it soon becomes apparent that it's not just wine that's gone missing from the abbey, and the body on the moor isn't the last ...

"...vibrant history, well-developed characters, a complex plot and a decapitation."

The Devil's Acolyte was reissued by Canelo Adventure on 12th October 2020 in a new Kindle edition.