When Jack Blackjack disobeys the orders of his spymaster, he enters dangerous waters in this lively Tudor mystery.

April, 1555. A priest has been stabbed to death in the village of St Botolph, to the east of the City of London, his body left to rot by the roadside - and Jack Blackjack stands accused of his murder.

As well as clearing his name, Jack has his own reasons for wanting to find out who really killed the priest - but this is an investigation where nothing is as it seems. Was it a random attack by a desperate outlaw, or do the answers lie in the murdered priest's past?

As he questions those who knew the dead man, Jack is faced with a number of conflicting accounts - and it's clear that not everyone can be telling him the whole truth. But Jack is about to be sidetracked from the investigation ... with disastrous consequences.

"Treat this review as biased if you like, but this is a great book."

"The improbably and delightfully humorous protagonist moves the story to a surprising conclusion."

"...an enjoyable jaunt through mid-16th-century England." 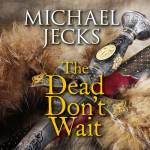 It was first published in the US on November 5th, also by Creme de la Crime (Severn House):