When Jack Blackjack disobeys the orders of his spymaster, he enters dangerous waters in this lively Tudor mystery.

London, 1555. Queen Mary is newly married to Philip II of Spain - and not everyone is happy about the alliance. The kingdom is divided between those loyal to Catholic Mary and those who support her half-sister, Lady Elizabeth.

Former cutpurse turned paid assassin Jack Blackjack has more immediate matters to worry about. Having been ordered to kill a man, he determines to save him instead. But Jack defies his spymaster at his peril ... and even the best-laid plans can sometimes go awry. When it appears that Jack has killed the wrong man, he reluctantly finds himself drawn into affairs of state, making new enemies wherever he turns. Can he survive long enough to put matters right?

"...it's a fascinating blend of genres. It's an historical novel. It's a murder mystery. It's a spy thriller. It's an adventure. It's a comic romp (sort of). And on each of these levels, it works a treat."

"Jecks brings the seamy side of Tudor London to life through rich, atmospheric descriptions..." 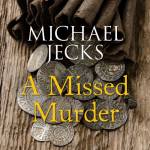 It is also available for download in a Kindle edition.

The audio book, read by Peter Noble, is available from the publisher in a choice of formats or as an Audible audio download.