The Butcher of St Peter's 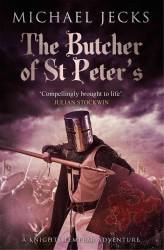 Exeter, 1323 A strange man is entering people's houses at night, causing panic amongst householders, because this is a man who likes children. And although many had thought him harmless, now he seems to have committed murder. A man lies dead in his own home, slaughtered merely for trying to protect his children, and the folk of Exeter want this menace caught and hanged.

For Sir Baldwin de Furnshill, the death is suspicious. The dead man was an enthusiastic seeker of felons, a King's officer in the city of Exeter, and he had many enemies, especially among the criminals who infest the filthy suburbs where the brothels lie.

But the whole city is on edge. The friars are preaching against the Cathedral Chapter, and there are allegations of theft from guests in the Dean's house, all at a time when the King's friends are setting knight against knight and lord against lord. As the country prepares for yet another civil war, and the city's new Coroner appears to want to set himself against the King's allies, Baldwin knows that finding this murderer is going to be very difficult indeed.

And when two more people are found dead, the city of Exeter shudders at the thought that there could be a killer out there who is determined enough to strike again and again...

"As ever, Michael brings the city of Exeter and his people to vivid life and his compelling narrative meant that, as often happens with his books, I ended up carrying it around with me to catch a quick chapter when I could."

Extract from The Butcher of St Peter's

Guibert stood and faced the men in his doorway. "What is the meaning of this sacrilege?"

"You're holding a funeral in here, Prior! You know you don't have the right without discussing it with the canons."

"Who are you? Is that Peter de la Fosse? What do you mean by this intrusion? We can bury this man in our chapel. He has made over his wealth to us already. There is nothing here for you, Canon."

"Don't try to persuade me of that, Prior. You've extorted all his wealth, I have no doubt, and you're welcome to install his body in your cloister when we have done with it, but the cathedral has the monopoly of all funerals still. That man is ours. The candles, the cloth, everything is cathedral property. You'll relinquish it now!"

Michael Jecks talks in his newsletter about where the idea for The Butcher of St Peter's came from. 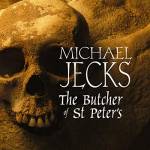 Order The Butcher of St Peter's from Amazon: