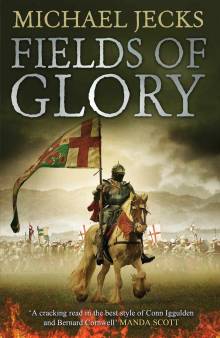 The year is 1346 and King Edward III is restless.

Despite earlier victories his army has still not achieved a major breakthrough and the French crown remains intact. Determined to bring France under English rule and the French army to its knees he has regrouped and planned a new route of attack.

And on the beaches of Normandy his men now mass, ready to march through France to victory.

But the French are nowhere to be seen. Edward knows that the worst thing he could do would be to take the battle to the French, where they will have the advantage and so he sets up camp near a small hill at Crecy and waits. The Battle of Crecy will be a decisive turning point in the Hundred Years' Wars.

This is the story of that battle and the men who won it.

"Fields of Glory is highly recommended to fans of historical military fiction, and I look forward to reading the succeeding books in the series."

Fields of Glory is the first in a trilogy following the fortunes of a vintaine (platoon) of soldiers in the Hundred Years War. It was originally published by Simon & Schuster in June 2014 in hardback; the paperback edition was published on January 1st 2015. The Kindle edition has now been reissued by Sharpe books.