Hello again - it's late spring, so it's time for a newsletter. And with a new book about to come out, it's probably time to explain what's happening with the series.

The trouble is, you see, the books have always been rooted in the actual events of the period. When I started writing, it was essential to me that readers would be able to get a genuine view of how people used to live: what they ate, what their houses were like, what the towns would look like, smell like, sound like. And rather than deal with the richer folks and aristocracy, I wanted to focus on the ordinary people, especially those who lived in Devon.

Today, of course, people look at Devon and Cornwall and think what delightful rural areas they are. This wasn't the case in the early 1300s, though. Back then, Devon and Cornwall were the two counties with the highest density of urban folks. This was for the excellent reason that the communications between towns and villages were dreadful. Trying to take a sumpter horse out from Sticklepath, you had the steep path going up the hill towards the west. In the new market town of South Zeal, there were hills on all sides. No journey was easy. 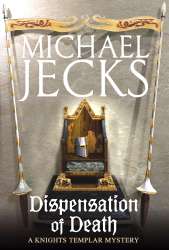 That for me made Devon much more interesting because it gave me huge variety. I could look at peasants and the knights who lived with them.

However, I have to try to be consistent with my characters. The sad fact is, a man like Baldwin would not have been able to hide his abilities. He's a man of his time, and for him, his education, his diplomatic training, his skill as a Keeper of the King's Peace, all would have marked him out. Those added to his friendship with the Bishop of Exeter mean he's bound to have become embroiled in national politics.

I am afraid my honourable friend, Baldwin, has become an MP in the latest book. The Dispensation of Death, which will be out in May, is the first of a short mini-series in which Baldwin and Simon are thrust into first national politics, and then international.

In this, the first, they are taken to London with the Bishop of Exeter as part of his coterie of advisers and guards. There, they learn that there has been murder committed within the palace of Westminster itself. The King demands that they help find the murderer.

I do hope that readers won't be distressed about my moving these two men up to the capital. The simple, sad fact is, they would be likely to have become involved in affairs of the day simply because of their association with Bishop Stapledon, who was at this time the Treasurer. I hope those who want to learn more about Devon will be patient - the next two books will be abroad, but book 26 will see them both returning to their own lands, briefly... The invasion of Roger Mortimer with Queen Isabella in a rising against the Queen will lead to still more troubles for Baldwin and Simon!

While talking about books, I have to mention the next Medieval Murderers book, too. This will be House of Shadows, an excellent follow-up (I hope) to The Tainted Relic and Sword of Shame. This too should be available in May from Simon & Schuster. Just to worry you, the fourth book in the series is being written already, and we've acquired another Medieval Murderer in the excellent CJ Sansom. He should need no introduction to readers of historical murder stories. His first book, Dissolution, was an international best seller, and all his books since then have been extremely well-received. I'm looking forward to working with him a lot more in future.

The Medieval Murderers at the Lincoln Book Festival: from left to right, CJ Sansom, Bernard Knight, Susanna Gregory, Philip Gooden, and me!

And now to a new project which is keeping me very busy. Thanks to the generosity of Keith and Paul, I've sold some of my first editions, and I am experimenting with Flickr to get my photos on the web as a blog of sorts: you can see the results here. What I am trying to do is to have all the pictures put up on the internet attached to a map, which will allow people to go to the map, and by clicking on a link, see photos which show what the area looks like, what interesting features there are in it, anything, really, which bears on the books set about there. I've not managed to cover too much territory yet, for reasons below, but hopefully readers from America or Australia will be able to get a feel for the landscape round here by looking at this.

I mentioned that I've been a little slow on the pictures. I've been asked to help with an encyclopedia of crime writing, for which I am submitting some articles, which is taking some time. More, though, is the CWA Ian Fleming Steel Dagger, which has rocketed. I'm having to read all the best thrillers of the year, which means about 100 or so, in order to try to select the best. Not an easy task, but at least it's enormously entertaining. And of course it means that I'm not so entirely frozen out of modern life now.

However, the family's also had a rather hard time recently.

Last photo of puppy before her knock.

Our puppy was running along with the Bernese Mountain Dog, and the two bumped into each other. Only very gently - I know, I saw it - but instantly the pup started yelping in agony. I had visions of a broken leg, torn muscles or something, but it took a week of the pup suffering before I was referred to a specialist vet who dealt in spinal problems who was able to find the problem.

Apparently she had a horrible spinal infection called Discospondylitis. It's an infection that attacks the vertebrae, and in her case two of them were eaten away. Almost all the bottom third of both had gone. Well, revolting as the illness itself was, the cure was straightforward. She must not be allowed to run, trot, jump, go up or down stairs, play with other dogs - nothing, basically, which makes a puppy's life worth living. So for the last eight weeks she's been locked in a cage.

Now, thank goodness, she's well enough to be allowed on a lead for short walks, and I think she'll make a full recovery. However, I can happily attest to the extraordinary quality of interruption that a Rhodesian Ridgeback, bored, can provide to a working author. PG Wodehouse once wrote that it was never very difficult to discern the difference between a ray of sunshine and a Scotsman with a grievance, and I can promise you that the same rule applies to a bored Ridgeback. I look forward to being able to take her for long walks on the moors soon. It'll help get the pictures done.

However, there is one last thing that is getting in the way of work just now. Last year, being daft, I was foolish enough to take the Mickey out of a friend in the village. He had sent a text message to say that he was resting in a pub while on the London to Brighton bike ride. Naturally, being a man of great restraint and respect, I made mention of his laziness, laxity and general lack of commitment. He responded, "If you think you can do better..."

So this year, I too will be cycling the fifty four miles from London to Brighton. I won't be racing, and I am very confident that at more than one point I could be persuaded to pause and sup a pint too!

However! There is a serious point about this. The ride is all in aid of a worthwhile charity, the British Heart Foundation. They need money to conduct research into how to cure heart disease and help reduce the number of deaths caused by our modern sedentary lifestyles. Well, that is a matter of enlightened self-interest to me, because you don't get a much more bone-idle character than an author in full flow, but it's not only me. The BHF does a huge amount of work to save people from heart disease.

So, to cut to the chase, if you would like to help fight heart disease, please consider sponsoring me. If you'd like to, please send money by clicking on this link www.bhf.org.uk/sponsor/templar - and donate. Perhaps the next newsletter will include terrifying photos of me on a pushbike, unless you send in your money!

I had an exciting evening last week. In apology for sending this newsletter late, I compiled this email to my website administrator. Now it makes me laugh - at the time I was not in a happy enough mood...

"Dear Jean
"Well, I was planning on making five gallons of beer tonight. My daughter wanted to help, but since Jane was away, I had to wait until I'd got Billy Basher to sleep before I could make a start. So that was all evening until 7.30 before I could chuck him in his bed and tell the little monster that two stories was his allocation and he'd had three already and wasn't getting another Winnie the Witch tonight. So downstairs.

"And I had a brainwave. You see, I have three pressure barrels. So I reckoned, hey, why not brew up twice the quantity in my kettle, and then water them down? That way instead of brewing only five gallons, I'd be making ten. Double the beer for the same effort, eh? Good idea? Yup. That's what I thought. So I chucked in fourteen pounds of grain to the water. And then...

"You see, you go ahead with the best of intentions, and then there is the law of unintended consequences.

"I had now brewed enough to fill two five gallon containers with beer. Good. Fine. Except I only had one that was ready to be used. I have several others - most are so old they won't do. Three are fine. One had five gallons of ale I made last week. OK. One was empty. Good. Um. The other was also full, though, waiting with five gallons of lager, until I could be bothered to clean, disinfect and wash intensively forty bottles. Bugger. So I had to clean forty Grolsch bottles ready to be used, disinfect them, rinse them, and then fill them. Then I had to disinfect and rinse the main barrel. Brilliant. That cost me another three hours. By now my little helper had been sent to her pit. And I carried on. The lagers are now out in the shed. Great. And I had to carry on cleaning out the beer barrels. And I succeeded. Yippee! The things were ready and done, and no problem. So I sparged (oh, bloody well look it up) the malt and got all ready, then put everything back in the brew kettle. Except suddenly the bleeding kettle sprang a leak, and Berry, the Ridgeback, was all over the floor licking like a puppy in heaven. I had to empty the kettle, hoping like hell I'd not compromised the cleanliness etc, then check the seal on the tap, change it, bugger about for an age, and then watch for another hour and a half while the hops boiled. And I didn't have the right hops. This is not, I thought, a good evening. Still, all done at last. My second boil's hopefully done now. It's one fifteen. I have to be up in six hours for the puppy.

"I haven't finished the newsletter.

Well, that's all for now, though. I hope you enjoyed this newsletter, and do please keep in touch.
Best regards
Michael Jecks
Northern Dartmoor