It seems as though every newsletter I write has to have a first line which is an apology for taking so long to write a new one. Well, this is no exception. My first reminder that a newsletter was due was sent to me some four months ago. I'm sorry!

The trouble is, the books are getting to an interesting point now, and it's the trial of finding time to concentrate on the 21st century when I feel I ought to be sitting down and rearranging lives in the thirteen hundreds that makes it so hard. Still, here goes.

First of all, there are all the new books. The latest, The Malice of Unnatural Death, is out there now, and getting good reviews. In the last month it feels like I've visited almost all the bookshops in the West Country, courtesy of the excellent George Gamble of Headline. He's been driving me around and making me appear sane in front of other people.

At the same time The Death Ship of Dartmouth has been published in paperback, and it's selling really well. It's even come to the attention of the New York Times, and it'll be in their Book Review pages on 24th December. Now, I personally still don't understand the UK book trade, let alone the US one, so I'm going on the words of my colleagues in the publishing industry when I tell you that apparently this is good news. Unless they write a lousy review, in which case it's possibly bad news. I don't know. I'm only the author, so I won't hear for ages.


There are always distractions for an author, of course. Morris dancing with Tinners' Morris keeps me moderately fit, mildly inebriated and firmly grounded in the twenty-first century. Well, two out of three ain't bad. 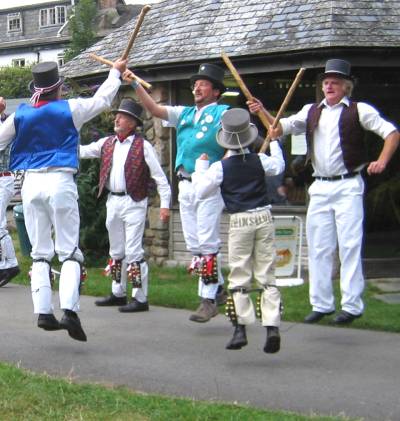 One of the worst work-avoidances/displacement activities, is a puppy. Well, I have learned ever so quickly that having a new pup can lead to a distinct slowing of the creative juices.

It's not that the pup intends to get in the way, you understand. It's just that as I sit here at my desk, I can hear the little noises that demonstrate the pup's awakening. I can hear the little whine, the scrape of her little claws at the door as she asks to go out; I can hear the gentle sound of her teeth removing the paint from my skirting boards, the little crackle as she prises away another piece of plaster, the rampant splintering of the legs of the stool in the kitchen, the rip of the slipper as she shreds the ...

She doesn't intend to stop me, no. But every time I hear her waken, my ears begin to strain. It is fortunate indeed that she is beautiful, both in looks and manner. Not that the old Bernese would necessarily agree when the pup chews, worries and tugs at her tail.


There haven't been enough hours in the day to get out on the moors recently. I've been stuck indoors working on new synopses, plotting the next book, and also working on some other projects.

The main one is the next project with Medieval Murderers. This one's going to be great fun. We already have the third book, House of Shadows proofed ready for publication in the middle of the new year. That, hopefully, will attract many new readers, because the first two have been very successful.

Our fourth, which currently goes by the marvellous title of "Book Four", is going to be the first which includes our new companion-in-arms, CJ Sansom. Many of you will have read his books, and he's been a great colleague to work with on the planning of this new book. Hopefully you'll enjoy it, too, when it finally hits the streets in 2008!

After that there's also British Crime Writing: An Encyclopedia, which is being written ready for 2008. This, edited by the magnificent Barry Forshaw, is going to cover all modern and historical crime writers, and I'm going to be contributing some 4,000 words for it.


However, for those who want news about the Templar series: I am already building up the story for book 24.

We have 23, The Dispensation of Death more or less finished (by which I mean I am waiting to hear back from my copy editor), so that is the summer's book done. Now I have to write the follow up, which is likely to be called The Templar, The Queen and Her Lover. The main plot is ready, and the locations and periods are building nicely. It's my second foray abroad, though. Poor Baldwin is going with Queen Isabella to visit France, helping to protect her as she negotiates with her brother, the French king. The book after that will involve the arrival of Isabella's son, and Bishop Stapledon's sudden flight from France, convinced that his life was in danger (he was probably right!). And then I'll have to put in my five penn'orth on Stapledon's murder, too. This is the sort of development which gives me - and others - headaches, though. I am discussing with my website administrator and the local tourist board down here in Devon, a set of maps which people can look at to see where the main action happens in each of the books.

Now for most, that shouldn't be a problem, should it ... except Baldwin and Simon have wandered a little in the last few years. First they went off to Galicia, then Portugal, the Scilly Isles, Cornwall, and shortly they'll be slipping off east towards London and France. Not ideal, really, when you want to have one map which readers can go to and click on to get a better feel for the location - so it'll take a little more time, sadly, to figure it all out.

At least it gives my brain some exercise.


I have some projects which are still developing. One is to have a specific part of the site that gives pictures of the moors on a daily or weekly basis, so that even readers from a long way away (yes, Paul, I mean you here!) can see how much it rains over here. Another idea is to have specific areas photographed, so people can see, for example, not only a map of the area, but also a photo of the moors as they appear today.

What do you think about that kind of development, though? Would it add to your interest in the books to be able to see pictures of the actual locations, or would that get in the way of your enjoyment? I'd appreciate your views.


Sadly, it'll mean I have to sell some old books too. Back in the summer I had a slight shock when my daughter called me from our sitting room. The ceiling was falling in, she said.

Like any sensible father, I remained calm and cool. I screamed at her to get out "NOW", and when I went in to look a few minutes later, I saw that she was right.

What had happened was: the sitting room was built as a single-storey extension about twenty-five years ago. The attic space above it was very useful, since the roof there was modern(ish) and dry, unlike the main attic over the old house. So, when we had the main attic reinsulated, it seemed a good idea to shift all the stuff from there to the extension space. Except this was an unsupported botch job and never intended to take any serious weight. So, when all my author copies of book going back to the dark ages were stored up there, the joists went on strike. Well, it's all been replaced now, but it still leaves me with a couple of metric tonnes of books to dispose of. Which means: if you, dear reader, would like to acquire a copy of any of my books, please let me know.

As I understand it, the first three books are worth about £200 each now - which is a shame because I think I only have one of each of the first and third (The Last Templar and A Moorland Hanging. Still, I do have more copies of books four and five (The Crediton Killings and The Abbot's Gibbet) which are worth about £120 each. Subsequent books, if you're a collector, are much more reasonably priced! If anyone is interested in them, please let me know and I'll see if I have what you want. Otherwise they'll be going to a dealer - hopefully there'll be enough there to pay for a new camera to take the pics of the moors I mentioned above.


And that is about it. Do please keep in touch - many of you do, and it makes the job much more interesting to have feedback, so please keep it coming. And, whatever your faith, I hope you all enjoy a very Merry Christmas break and enjoy a Happy and Prosperous New Year!

And that you continue to enjoy my books, of course!
Michael Jecks
North Dartmoor
England