It is that time of year again, the time when my website administrator reminds me gently (Oi! Jecks!) that once more I am late on the deadline for getting my Christmas Newsletter to him.

This year has been one of extreme highs and lows. The lowest point was the death of my father, Roy George Jecks, always known as "Peter". He was a great guy to know, with a wicked sense of humour, powerful determination, and a passion for all things science-based. In the War, he was one of the first members of the newly created Royal Electrical and Mechanical Engineers, specialising in operating RADAR. After the army, he began studying at university, and won a first class honours degree in only two years in the evenings - he was in a hurry - before taking and passing his Actuarial exams. He met our mother while working at Legal and General, where his interest in technology led to his becoming their first Data Processing Manager. He really was a man who was born into the perfect period for his interests and skills.

As an indication of his humour and zest for life, I think his letter arranging for the sensible use of his body parts after his death sums him up.

I see in the April issue of Which? You can give further information regarding the use of bodies for research.

I have already made provision in my will for any usable spare parts to be used and for any unservicable ones to be available for research. We have been informed, however that any hospital using the corpse would at the end of the research return it (probably in pieces) to the executors for disposal.

My wife is not desirous of receiving two years after my death a pacel containing my unused components for disposal and I wonder if the hospital could dispose of it by cremation.

His death was a horrible low point, as you can imagine. However, there have been positive aspects too. One abiding interest of his was his dogs, and in particular his Rhodesian Ridgebacks. He had two lovely girls over a couple of decades, and I developed a deep affection for the breed as a result. A few months ago we took on a new Ridgeback puppy to compensate for losing our old lady last year. This new model has led to some interesting times in recent weeks. She is beautiful, affectionate, sweet-natured, bouncy, and horribly alarming. Our last one was a good 43 kilos as an adult, but this girl, at four months and one week, was already 20 kilos - the same size as our ten year-old Dalmatian. I fear she will become a very large hound indeed.

Not that I care. She is particularly good-natured, as I said, and will become a wonderful companion.

Those are the highs and lows of my social year. So, what of the other side of life: my work?

It has been a strange year in terms of work.

Early in the year I became the Hon Secretary of the Detection Club, which was a great honour. Then again, last year I published three books, and this year has been much quieter, with only the one: A Murder Too Soon, the follow up to Rebellion's Message. I'm glad to say that it was very well-received, with Publishers' Weekly and the Historical Novel Society giving it very positive comments.

I have to admit that I really like this series. Yes, I know authors always say that, but when you've written as many books as me, you get to feel the difference between books that inspire pride in a story well told, that depict characters the way you intended, and a story that is just ... well, fun, basically. I started writing the first in the series, Rebellion's Message, as an escape. My mother had died, and I was looking for a tale that would be relaxing for me. I had the idea of a Tudor story, but I really liked the idea of the incompetent and thoroughly reluctant assassin at the heart of the story. It was a wonderfully therapeutic story to write. It was fun to write. 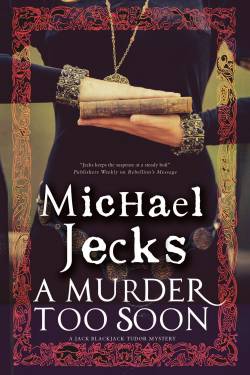 I was keen to escape the larger themes and longer plots, and return to a more compact story, with a realistic, credible central character. Thus was born Jack Blackjack. The poor devil did not have much fun in his first outing. Being caught by the Wyatt Rebellion in London, and being sought by the rebels, Queen Mary and Princess Elizabeth, all of whom wanted him dead, rather spoiled his fun. Luckily, in A Murder Too Soon, he thinks he's landed a safer job when he is sent to Woodstock - but then he finds himself in the tricky situation of being found with another dead body. Which would be fine, except that he was supposed to kill the woman. It adds a level of complexity to his already confusing life.

Readers who have enjoyed these two stories will be glad to hear that those excellent folk at Severn House have already commissioned two more books in the series. I am in the middle of planning book three now.

A large part of this year has been spent working on a new series. Some little time ago I had the idea for a group of stories set during the Crusades. As my readers will have guessed, I always like to return to medieval times. I can remember when I first read about the Crusades, when I was an early teenager, and being thrilled and appalled in equal measure. The heroism and acts of courage were inspiring, but there were many darker aspects: the barbarism displayed - especially that of the Christians, it has to be said - was appalling. The slaughter at Jerusalem, Richard I's appalling behaviour at Acre, events such as these beggar belief. Trying to explain the motivations of the pilgrims has been challenging, although at least there was a deep religious conviction at the heart of the worst atrocities, whereas with my Vintener Series, I had the difficulty of trying to get inside the minds of men who were not driven by religious fervour, but only by lust. The new series is good, though, and I am currently having fun reading through the proofs.

But these are not the only new books. I'm finishing the last draft (I hope) of a book that should have been delivered many months ago. This is to be called The Felon Pleaser, and is number 33 in my Templar series. Yes, at long last Simon and Baldwin are returning. Publication will be in the first half of the new year, but I'm afraid I don't have a date yet. It is all my fault, this time. I've been a little slow, first because of my father's death, and then because of the hound's arrival. She has been a little disruptive.

It's a good little story, that ties together my last Templar story, City of Fiends, with Baldwin's interests in local murders. This one avoids the national politics, and returns to a rather more parochial murder, although obviously I do add the Jecks twists and turns to the plot. Incidentally, it was good to see that certain TV firms like my books:

As soon as that book is completed, I have one other new project; another historical, but not UK-based. It will involve many of my interests, and a very romantic and evocative location. I can promise plenty of thrills and excitement, and it's a project I am really looking forward to getting my teeth into. I've been planning this one for over a year now.

And that, I think, brings you up to date. The only other thing that I have abjectly failed to do this year is keep up with my painting. But now I have been given a commission for a specific painting (I'll include a photo of it with the next newsletter, but it's a Christmas present for someone, so I can't include it here!), which I have to deliver before too long, obviously.

I do hope this has been interesting. Do if there's anything you would like me to include in future newsletters, and do let me know if you have a change of email address.

Here's hoping you have a Very Merry Christmas, and a thoroughly Happy New Year!
Best wishes from Dartmoor
Michael Jecks