2018 has been a very busy year, with two new books published, and three new stories written. 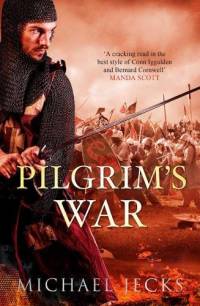 The first of the new books, Pilgrim's War, came out early in the year, published by Simon and Schuster. It's the story of the First Crusade, and looks at the hideous journey that the poor pilgrims had, marching over Europe to travel to Constantinople, where they crossed the sea to reach the Holy Land and make their way, mile by weary mile, to Jerusalem. The Crusade was preached by the Pope to liberate Jerusalem, which had been in Muslim hands for over four hundred years, but even he probably had no idea how his offer of remission of sins for those who took part would galvanise the poor peasants of Europe. Tens of thousands took up the cross and tried to reach Jerusalem. Sadly all too few succeeded, but this is the tale of a few of them. So far it's won rave reviews - and I still have some copies for the dedicated reader! 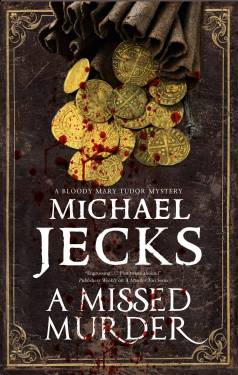 Second was A Missed Murder, which is the third novel featuring my incompetent assassin, Jack Blackjack in Mary Tudor's England. This series is very tongue-in-cheek, and poor Jack tends to lumber from one disaster to another, but I think he's an engaging fellow. After every mishap, he tends to bounce back, which in this story is very fortunate: he has been told to commit an assassination, but having arranged for a cast-iron alibi and sub-contracted the killing, a messenger arrives to tell him that he must cancel the murder. And he has little time to do so. However, the appearance of Spanish noblemen, a large sum of money, and the attractions of a woman mean that his life is, once more, "complicated".

Many of you may have missed Rebellion's Message and A Murder Too Soon. They are published by Severn House, a smaller publisher that concentrates more on book sales to libraries, and ebooks, and which has been very strong in recent years. They have built a strong portfolio of titles - but without having a mass-market strategy. Last year they were bought out by Canongate, a larger group which has a more conventional offering with mass-market titles. Canongate has created a new imprint with Severn, called Black Thorn, which will take some Severn authors and push them back into the high street where they belong, and they have selected my series for publication. So, if you haven't been able to read Rebellion's Message yet, you will be able to buy ordinary paperbacks from next year (not till later in the year, but it's worthwhile waiting for good things!).

Earlier in the year I took three days off from work and walked with a friend and my son around the Lizard Peninsular in Cornwall. It was a joy to walk it, and enormous fun to spend time away from work just walking and enjoying the scenery. It reignited my enjoyment of walking - but did make me realise that my rucksack, while being comfortable on the first day, was too heavy. It carried 70 litres, and I don't really need a bag that large, so I've gone to a lightweight 1.2 kg backpack that holds 48 litres. I've changed my tent to a lighter model as well. Those two jobs have reduced the weight from 5 kilos to 2.5 for the backpack and tent combined. That will be much more comfortable for me now I'm getting older, and hopefully I'll be able to walk longer as a result.

The year has been strange on a personal level, because my "little girl", while I wasn't watching, suddenly became a young woman and has flown the nest to study Architecture at university. I am enormously proud of her work ethic and her skills as a designer and artist, and it's been wonderful to see how she has taken to her new course (she made a better choice than me!), but it has meant that the house has become rather quieter than before. She started this year with a trip to Switzerland to visit CERN, and see the Large Hadron Collider; after her A levels, she flew alone to New Zealand, where she visited Auckland, Wellington and Queenstown, and had a magical time. Now she's at university, but preparing for a field trip to Portugal early in the New Year.

Personally, I don't know how she does it.

Of course, having a Rhodesian Ridgeback of less than 18 months has added to the noise in the house. From the first mad five minutes before breakfast, when the crazy mutt runs in figure eights from kitchen through to my office, snarling and growling viciously in an attempt to get someone to chase her, through to the moments when our Dalmatian's food bowl is empty, and the hound flips it over and over, to the times when she brings her latest favourite toy and plops it on my lap to entice me away from the keyboard, she is a daily diversion. We wouldn't be without her - well, not most of the time, anyway. It depends on which letters she's shredded that morning, which items she has stolen from my desk, which valuable item she has stolen from the shelves and destroyed, which ... You get the picture.

Now for a serious bit.

Writing is at best a speculative venture. It is extremely difficult to earn a living as a novelist, which is why so many have decided that they cannot continue to rely on writing as their sole means of income - or, indeed, continue writing at all. In 2005 40% of authors could live on their writing. By 2017 that had fallen to 13.7%. Incomes have dropped from £12,330 (which would today be some £18,000) to £10,437. The national minimum wage is £7.83, but many writers are earning a small fraction of that.

Even household-name authors are seriously having to consider giving up writing for a living because it is simply non-viable. Too many book sales are driven by ridiculously low charges or free giveaways. With the environment of high discounting, authors are hit harder.

Because my books are published under tight contracts, I have been looking at other approaches to "monetising" (I hate that term!) my work. One area I've been enjoying in recent years has been YouTube, where I make videos of books I have liked, of aspects of writing and communication, and of various writing tools and materials. What has astonished me has been the interest in my comments on pens, pencils, paper and inks - which I would have considered a rather niche area, but which has a rapidly growing viewership.

I have at present several books that need work on them to make them suitable for a wider audience. There is a new Templar book that is almost completed (the publisher was forced into receivership before it could be published); my first ever book, The Sniper could easily be edited for ebook and limited edition publication; the first in a new crime series is written and requires a little editing; a modern day police procedural series is close to complete, with two books needing only a little work. Yet it is very difficult to find time to do anything with any of these because my time is so taken up with writing new books.

There are various schemes and websites that cater for this kind of situation. Kickstarter programmes raise funds for authors to make some money while they work on projects. I am seriously looking at these, and also Patreon, to see what sort of potential there is to find additional funding for my works.

My main objective is to keep writing. I love this work: inventing characters and seeing the world through their eyes, imagining their lives, whether in the present day or far in the past, but I have a responsibility to my family to earn what I can, and with the direction of author incomes being entirely negative, I may well have to stop writing and seek a new challenge. It will be interesting to research other avenues. If any of you reading this have comments about Kickstarter projects or Patreon, or other ideas, I would be very interested to hear from you.

And now that is about it. I am hoping to get out more next year, and visit bookshops and libraries whenever possible, and I'll try to get more organised about writing to you when events come up!

Many thanks for following me here. Do please write with any questions or comments on my books, my videos, or your view on Patreon and other financing methods for writing.

And now, may I wish you a very Merry Christmas and Happy New Year!
Michael Jecks