This has been a rather odd year so far. There has been a lot of working, but real life has intruded, with our oldest going to university to study, the youngest beginning his GCSE years and astonishing us with his hard work and general competence (not many boys get 100% in mock mathematics, after all).

But I'm not here to talk about my children. I'm here to talk books and writing, so, let's look at what's been happening.

Last year I wrote a really rather good book, which I was proud of, and sent it off to my new agent for her comments. It's a bit of a new departure for me, a crime book that is set in the riotous twenties. Very different, but enormous fun for me, since it's such a different period. Well, she did have comments. They were not extensive, but she wasn't too sure about the atmosphere for the book. She wanted it a little harder-edged. Which is fine, and quite normal. Hurtful, but normal.

I sat back, absorbed her comments and thoughts, and soon came to realise that I had made a bad mistake with this one. If you've read all my books, you'll know that my Templar series tended to be fairly convoluted on first reading, because I looked at each investigation from the perspective of all of the main players - the good guys and the bad. It meant I could make each story much more involving. It pulls readers in, when they can look at every event from the perspective of the potential killers as well as the investigators. I found it much more enlightening to write that way - and I think readers found the same. 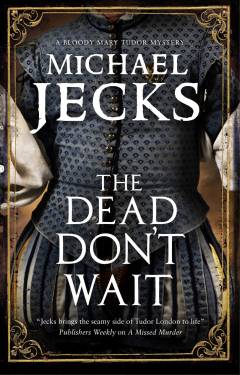 However, with my more recent stories, the humorous Jack Blackjack/Bloody Mary series, I have written the stories from the single point of view, that of Jack himself. He's been a great fellow for me. I find myself chuckling as I write his scenes, and when I'm describing his reactions and how people respond to him, it's invariably hilarious. But that is the point, I think. I'm writing in the first person because it allows me more leeway to give clues about his own foolishness and incompetence. Somehow it is entertaining to see him misinterpret other people's views of him. But with my latest, I used the same first person point of view, and here it doesn't work. It reduces the tension and takes away some of the "edginess".

Late last September I had to put that book aside and begin writing my fourth Jack Blackjack story, and that was a joyous, easy write. It took three months, and then I had another month of copyedits and proofs, and the book was all done and dusted. The Dead Don't Wait was finally put to bed and will be published on July 31st.

All of which meant that from March I could return to the latest book - which has the working title of "One More Dance Before I Die". Which has been enormously hard work, because I have to rewrite every scene so that it's not first person but third person. If that wasn't enough, I have to write a number of scenes from different perspectives, which means a certain amount of re-ordering, replanning and rethinking. I have to assess where specific scenes can still be told in flashback, for example, and where they should more naturally be told by the participants. And then I saw an opportunity, and added a whole new thread to the story as well, which was quite a lengthy process.

You wouldn't believe how much work there is in going through a book, line by line, and changing every "I" to "he", or "my" to "his", "our" to "their" etc. Can you do a global search and replace across an entire novel? Not a chance! Take "I". Every time you have an "Ian" it would become "hean", or every "In the beginning" would become "Hen the beginning" (or, worse, if you forget to capitalise the search, it would become "Hen the beghenheheng"); or changing "our" would mean every "hour" would become "htheir" and every "my" would lead to such interesting infelicities as "mystery" becoming "hisstory". Using automatic correction would lead to such a disastrous effect on the book that it would be impossible to correct it all.

So, rather than run that risk, I have gone through the book line-by-line, and now it's almost done. It needs a bit more work to get it fully sorted, but the main story is infinitely more effective, and although I'm going to have to read it through carefully, edit it very hard, make sure that each voice is strong and individual, and has an equal share of the story, before it goes to the agent again, I am pleased. It's a much stronger story already. Only one more month on this one, because then I have to write the fifth in the Jack Blackjack/Bloody Mary stories. Severn House, and their new owners, Canongate, want to have two more titles in the series, which is always the best of compliments an author can ask for.

There have been some interesting developments recently. In the last six months I've had two approaches from companies who want to try to produce film or TV versions of the Templar series - but don't hold your breath! Sadly, although publishing contains dangerous waters for the novice swimmer, they are nothing compared with filming companies. Those are filthy swamps full of piranhas in comparison. I'll give you one brief example: one company asked me to sign a "non-disclosure" agreement before getting involved, which was fine until I had a company lawyer glance over it. The contract had an innocuous paragraph that suggested that after all parties had signed the document, all intellectual property would move to the first named party to the contract.

Let's just say that the first named party wasn't me.

It is also very sad to remember that when I first put pen to paper (or fingers to keyboard), I planned that, if the stories ever appeared on the large or small screen, Alan Rickman would make the perfect Baldwin. Now my wife thinks Rufus Sewell or Richard Armitage, although, as ever, trying to decide who would be the perfect Simon Puttock is a much more difficult question. Mind you, when she talks about Richard Armitage, I'm not convinced she sees him as Baldwin. I think it could be mild daydreaming!

And now it's almost time for The Dead Don't Wait to be published. Visits to festivals and libraries have been escalating ready for it. Earlier this month I was a guest speaker at the Chudleigh Literary Festival, last week I had a great event in Barnstaple Library, and then on 29th July I am at Paignton Library, on 30th I'll be at Totnes Library, and on 31st I'll be at Okehampton Library talking about Jack Blackjack, the series, and this latest story. So far I've been getting a very positive response from audiences. Then on 9th - 11th of August I'll be at the Dartmoor Folk Festival in South Zeal, with a book store in the main marquee, and also dancing with Tinners' Morris.

The Morris side is a great group of friends, but as the years pass, sadly, we have seen our ranks depleted. First Roger Paul, a great guy, died three years or so ago; last year our great friend Dave Hatton died, and now we have more members who are suffering from illness. Everyone will know how hard it is to lose friends, no matter how old you are; all I can say is, my Morris friends are among my best friends. They are supportive, generous and kind-hearted, so I just hope we can all keep dancing for as long as possible.

So far this year I have picked up my brushes to paint a grand total of .. not one picture. I am determined to change that, and to take at least one afternoon off a week, but it is difficult. I love painting, but it involves similar efforts of creativity as writing, trying to find a suitable subject, work out the best way to frame it, and to then work with paints to depict it in the best manner. For something that is supposed to be my relaxation, it involves a lot of hard work! But it does help no end to do something that does not involve sitting in the same seat at the same desk.

Some of you may not be aware that I have two different projects going, so I ought to mention them quickly here.

The first is my

channel called 'WriterlyWitterings'. If you go there, you will find a bunch of videos, talking about my own books, short reviews on other books, a series on inspirational authors (people I have a lot of time for), and reviews and comparisons of things I'm interested in - the main thing just now being a series of comparisons of tones and shades of Diamine inks for fountain pens. Yes, not something with the largest audience, perhaps, but several thousand viewers seem to rather like them.

And the second? Well, trying to make money from books is tough, so on

I have set up my own site where I tend to put most comment and videos. The way I have put up blog posts, videos, pictures and other comments on social media has involved me writing with Wordpress, photos on Flickr, Pinterest, Instagram, comments on Twitter and Facebook - and it's damn hard to keep track of everything. So instead I'm now concentrating more on Patreon. Yes, I keep comments on the other social media, but they'll be reducing over time. Patreon allows me to put up everything on the same site, which saves me a huge amount of time and allows me to concentrate on my writing. You can find me on Patreon here.

And apart from that, I now have to get back to the other works. I have to produce some marketing materials for Severn House about The Dead Don't Wait, plan a talk for the Nevil Shute Society next year, plan out the Crime Writers' Association conference next April, and some Patreon videos and blog posts... all of which means, I need more time!

And that timing was just thrown out, because the daft hound decided to eat a wasp. Amazing amount of swelling about her lips and muzzle, and then a number of lumps appeared all over her head and neck. Hence a rush to the vet for anti-inflammatories (apparently anti-histamines don't work as well on dogs as they do on humans). At least the swelling about her muzzle and the rash of lumps and bumps on her head have begun to reduce.

The excitement of working from home ...

I hope you all have a great summer!
Michael Jecks