The last couple of months have been ridiculously busy, with the usual slow, problematic hold ups that always tend to happen.

I tend to find that I work quite well under a deadline, but sometimes a series of deadlines can cause a mental logjam. For instance, next year in just one month I know I have to go to a great writing festival in the far east of the country, which will be just about the same time as I'll be working on a new book. And also running the Crime Writers' Association conference, as well as planning a four day course on historical crime writing for the Swanwick Writing School for next summer. Oh, and also talks to the Red Jackets, a number of tour guides who operate around Exeter.

Walking at Hound Tor with Smithsonian Journeys, showing the stunning landscape where The Hound of the Baskervilles was imagined!

Sometimes the deadlines are unexpected. In October I received a call inviting me to become a Smithsonian Journeys "Expert", which involved a week-long trip with thirty guests, talking about crime writing, my own books, many of my friends, but also the history of Devon, the Wye Valley, Bath, the Cotswolds, Oxford and London. That was, to be frank, a daunting prospect with one week to plan and prepare. Especially since it put back the writing of my next book.

Which I am currently finishing up: Blackjack/Bloody Mary V. My current pain is, trying to work out a good title. It's always so difficult thinking up new titles. 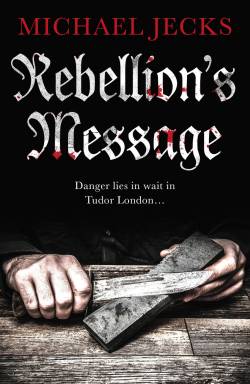 The first book in this series was enormously difficult as well, and I was glad to come up with Rebellion's Message in the end. And that is my book for Christmas, if you haven't read it already.

Rebellion's Message was first published four or five years ago. I had proposed the concept to Kate Lyall Grant, the editor at a small publisher called Severn House. I'd known Kate for years, because she had been an editor at Simon & Schuster, and while there agreed to publish the The Medieval Murderers' collaborative books, The Tainted Relic, then House of Shadows, Sword of Shame, and so on for a total of ten books. And they were all rather good, which goes to show that Kate has always had a good eye.

However, she made a move from Simon & Schuster to Severn House as chief editor, and when I had the idea for Jack Blackjack, she was immediately keen. Her enthusiasm made the writing a doddle, and soon Rebellion's Message was born.

But the life of publishing is nothing if not unstable. So when I heard, about eighteen months ago, that Severn House was being bought by a larger publisher, I was worried at first. I need not have been. The buyer was a larger firm, yes, but it's an enthusiastic company. It is not a vast multinational that looks on books as mere "products". Canongate is larger than Severn House, and is taking on some of their books and promoting them afresh, printing mass-market copies for high street bookshops. They are keen on Jack Blackjack (as they should be!) and Rebellion's Message will come out in December from their Black Thorn imprint.

I think that the first print run is going to be very small, so if you want a copy for yourself, or want to buy one for a friend or family member, I should pre-order now. You can find it here.

What is it about?

Well, Rebellion's Message is the first in a series of stories about Jack Blackjack, a pleasant enough thief during the reign of Bloody Mary Tudor, Mary I. He finds himself on the ground outside a tavern, with a lump on his head, and correctly divines that he has been knocked cold. However, when he casts his mind back, he remembers he had been taking the purse of a man in the tavern. And then he looked over and notices that there's another man in the yard with him. Unfortunately, that man has been murdered. And then Jack realises that he is gripping his own knife, and it is smothered in blood. That is the beginning of the story, and I am very proud of it. It was my first humorous series, and I think this first book sets the scene very well. Jack is an endearing character, who is utterly incapable of keeping himself out of trouble, and is about to be thrust into the middle of the political scene as Wyatt's rebels march on London to capture the Queen and depose her, to replace her either with Lady Jane Grey, or with the Princess Elizabeth.

As I mentioned, I am now finishing up the fifth in this Bloody Mary series, and this one is proving to be as cheery as the others. Jack is still amiable but incompetent, and just as firmly convinced of his masculine appeal to women, against all the evidence. But now he has a career - it's just not one he really should be pursuing with his own aversions.

You may want to know some other news, too.

I agreed to part with Simon & Schuster in the summer. Although I moved to them with every hope of a reinvigorated writing career, I have been very disappointed with the total lack of any marketing or publicity. In the last few years the total has been two tweets - not even publication announcements on the S&S facebook page. After Fields of Glory came out, I had a meeting with my editor, her assistant editor, and the head of Marketing and head of Publicity, and was promised that I would have more publicity for future books: even Pilgrim's War received no marketing. As a result I formally asked for the rights of all titles to revert to me. Simon & Schuster agreed, and I have spent the last few months trying to find the money to buy back the electronic files.

It has proved very difficult to get things back. As a result, 21 of my titles are still unavailable. However, this is about to change. I have today signed a contract with Canelo, which will see the first 8 titles available for publication next year, and Pilgrim's War too. They may commission a follow up to my Crusades book. Then they intend to take on the remaining Templar Series titles so that, with luck, all the Jecks titles will be available again.

The last few years have been very tough. It's hard with the market the way it is, but infinitely harder when the author doesn't feel the publisher is interested in the books the author writes. Personally, I find it astonishing that a publisher would take on so many titles, and then to do nothing to try to sell them. With luck Canelo will be a great deal more proactive.

At the same time, the Vintener Trilogy is going to be taken on by my friends at Sharpe Books. They already sell Act of Vengeance, and I am glad that the trilogy will be available from them too.

Now, to the newsy bits. First, if you haven't seen it, I have a regular video every Thursday at 5.00 pm UK time. This has grown and become mostly a review and comparison site for various types of writing implement. I look at mostly fountain pens, pencils, inks and papers, with an occasional foray into aspects of writing, along with help for students. It's been a really interesting project, which has been fun, but also has introduced me to a lot of other fountain pen fanatics. If you are interested, look up WriterlyWitterings on YouTube, and comment on the videos you like. If you are even more keen, you can subscribe to be notified of new videos coming through.

And now I have to mention another really exciting thing that I've started.

In the last few months, I have taken the advice of a friend and started to run a Patreon site. The reasons are twofold.

First, social media nowadays is really confusing. As an author, I have to be present on Twitter, Facebook, Instagram, and a number of other sites. I produce a YouTube video every week (like I said, take a look at WriterlyWitterings!), I have to have a presence on LinkedIn, Wordpress and elsewhere.

Each of these social media require different skillsets. And while they are all fun, they are also a major distraction from my real work, which is writing. With Patreon, I can put up videos, photos, or simple blogs, and it's all deliciously coherent.

However, there's also the other aspect, which I cannot ignore. At a time when the income from book sales is reducing, Patreon gives me a way of providing extra material for people who want to support me. There are different levels, starting from no charge - yes, the basic level of information I put on Patreon for free - and then from $2 upwards, patrons will receive more and more information about me, my writing, my books and everything else. You will see more at https://www.patreon.com/MJ150520.

Although $2 might be considered a small sum, for an author, it's the equivalent of the sale of about ten books, so pretty good.

And that is about it for now. I have about ten days to complete the book I'm currently writing, so today I will be stopping writing and rereading the whole of the first half, making extensive notes, so that I can tie up all the loose ends, red herrings, and make the ending as satisfying as possible. Wish me luck!

AND AN ENDNOTE:
If you happen to be in Devon at the end of the month, come and see me talking with Karen Maitland on 30th November at Dogberry & Finch, a new bookshop in Okehampton, where ! will be launching Rebellion's Message in its new guise! Do come if you can!

I enjoyed the trip with Smithsonian immensely - but it was good to get home!