On this page you will find information about all my short stories, which are now also available in two convenient collections. The first, For the Love of Old Bones, came out as an ebook on Kindle in summer 2012, and I was delighted and surprised by the sales. In fact I was so delighted, I immediately began work on a second collection, this time of all my other stories. No One Can Hear You Scream came out in the autumn, and was again well received by those who use modern technology for their reading. But if you prefer a book that you can see on the shelf after you've read it, paperback editions are also available.

And if you enjoy my short stories, you might also like the longer stories I contributed to the collaborative novels by the Medieval Murderers.

I am delighted to participate in another collaborative effort, with several friends from the Detection Club. Eighty-five years ago, members of the club wrote the now legendary The Floating Admiral: we have decided to see if we can repeat their success with The Sinking Admiral: 'The Admiral' is a pub in the Suffolk seaside village of Crabwell, The Admiral Byng, which is threatened with closure due to falling takings. 'The Admiral' is also the nickname of its landlord, Geoffrey Horatio Fitzsimmons, and also the name of the landlord's dinghy. When Fitzsimmons is found dead in his tethered boat, the villagers assume a simple case of suicide and fear that their debt-ridden village pub will now sink without trace. But they weren't banking on the fact that this story has been written by 14 extremely competitive crime-writers - arch bamboozlers who will stop at nothing to save a good pub!

And I'm thrilled that my story, Alive or Dead, from The Detection Club's collection of short stories, Motives for Murder, was longlisted for the CWA Short Story Dagger. If you haven't already read this collection of stories celebrating the birthday of Peter Lovesey, you may like to know that Alive or Dead is available as an ebook single.

For the Love of Old Bones 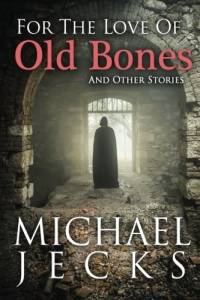 Four of my short stories about Sir Baldwin de Furnshill and Bailiff Simon Puttock now available for the first time in paperback as well as in eBook form:

No One Can Hear You Scream

All five of my short stories which are not based on my 'Templar' series are now available in one book. They range over time from the Roman period, through Jacobean, to the present day, with crime, thriller and horror stories designed to enthral: