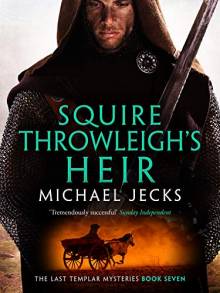 Two generations slain... but are there more to come?

Spring, 1321. As Sir Baldwin Furnshill prepares for his wedding, he receives the news that one of his guests, Roger, Squire of Throwleigh has just died. The new master of Throwleigh is little Herbert, five years old and isolated by his grief, as his mother Katherine unfairly blames him for her husband's death.

At Lady Katherine's visible rejection of her son, Baldwin feels deeply disturbed about the new heir's apparent lack of protection. For, having inherited a large estate and so much wealth, the five-year-old will doubtless have made some dangerous enemies ...

When Herbert is fatally hit by a horse and cart just a few days later, seemingly by accident, Baldwin and his friend Simon Puttock suspect foul play. Their investigation will lead them to the most sinister and shocking murderer they have encountered yet.

"... these are outstanding reads. Both insights into history and remarkably constructed mysteries."


Now available in a Kindle edition from Canelo Adventure.