The Traitor of St Giles 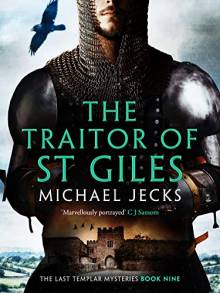 When a Knight Templar is murdered, things get personal for Baldwin...

On their way to a feast, Sir Baldwin Furnshill and Bailiff Simon Puttock find the murdered corpse of Sir Gilbert, a Knight Templar and old comrade of Baldwin's.

The situation is confounded when a decapitated body is found. Baldwin and Simon's suspicions that the two deaths are linked seem to be justified when Baldwin himself is attacked. Baldwin and Simon find themselves caught up in a baffling investigation...

The ninth instalment in the Last Templar Mysteries series, perfect for fans of Christian Cameron and CJ Sansom.

"... it's not just the regular characters that you come to care about... Michael Jecks does an excellent job of populating the book with real characters - some deeply unpleasant, it must be said, but others whose fates, good or bad, are as much a part of the plot as the mystery."

The new Kindle edition was published by Canelo Adventure on 10th August 2020.