Apologies are how I tend to start any email now, and I guess I have to do the same with this newsletter. It is enormously late - but that's a sign of the work I've been doing.

Just now I'm typing this with extreme urgency. I have just begun the round of signing tours which should lead to my latest book becoming a massive bestseller... well, hopefully to it being a moderate success, anyway. 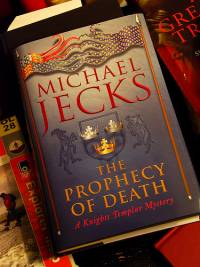 The trouble is, the book market is in a strange position just now. Incomes are dropping, which is one reason why I've been forced to look at alternative incomes. That means I'm wandering the country more giving talks, mainly covering researching and writing medieval stories. It's good fun, great to meet people, and rapidly growing to be a little difficult. If I travel, I have to ask for the travel costs, and with the latest price hikes on petrol, travelling is growing prohibitive. Still, I've recently been to Glastonbury, to Lincoln, to Crediton and elsewhere, and there is a building list of other events. So keep an eye on the website and see when I may be near you too.

Travel abroad is still more troublesome. Last year I was exceedingly lucky to be able to get to Alaska. A wonderful state with fabulous wildlife. I only wish I could have remained there a little longer so that I could do some target shooting and go fishing, but sadly I couldn't justify any more time away. Still, with any luck this year I'll be able to get to Baltimore and travel a little around other parts of the USA. More on that later, when I hear from the publishers.

So, with money tight, naturally I took a logical approach to things. Instead of writing the next book straight away, I sat down and started to plan a vegetable plot. Yes, I know this doesn't sound particularly exciting, but cheap food is attractive. And it does taste better when the vegetables are picked and cooked within a short period.

It was interesting for me to learn that I'm not the only author who depends partly on home grown foods. A short while ago I was invited to Ian Mortimer's with his family. You may have read some of my Author's Notes in recent books, in which I mention Ian and especially his fantastically researched books on historical characters. I have waxed lyrical about his work - and to my astonishment some little while ago I realised he was almost a neighbour of mine, living in a town only a few miles away. So we have now formed a close friendship, based on our mutual interest in all things medieval, and especially the early 1300s.

Still, it was with some nervousness that I presented him with a copy of The Prophecy of Death, the 25th book in my series. Not every serious academic would necessarily like to have their name, a name built on methodical study and the careful analysis of history, associated with, let's face it, some gleefully imaginative stories spun by a fiction writer! But to my delight, if not relief, Ian was very pleased. And to show what similar anoraks we are, we had a wander round his vegetable plot later in the afternoon.

I did have to mention him, because Ian has been responsible in large part for Prophecy of Death. It was a chance comment in one of the early chapters of his excellent book on the life of Edward III that suggested the whole of the story. Meanwhile, as I researched this book, my colleagues in The Medieval Murderers were also commissioned to write a fourth book, which has developed into the anthology called The Lost Prophecies.

I know that it'll seem odd to have two stories with the concept of prophecies included, but all I can do is plead innocence. Yes, there was a little to do with prophecies in both stories, but the Medieval Murderers plot is set around the theft of the crown jewels in the early 1300s.

What happened was, the monks of Westminster would appear to have colluded with merchants from London to permit a break-in into the strong room in Westminster Cathedral's ground. Over some days, men prised the bars from a window, and then dropped into the room, removing all the chests of jewels. The King's crown, his regalia - even the dagger which was used to try to assassinate him in Palestine - were all removed, and it was some while before the thieves were caught and the treasure recovered.

And no, there was not a happy ending for the thieves. Read the story, and you'll learn the true gruesome depths to which a medieval king could resort to "give a signal" as our modern politicians are always so keen to phrase it.

Still, it's not all hard effort. This year my Morris side and I have been involved in the Chagford revels, which involved learning a whole new dance.

This year's been tough for Tinners' Morris. First was Ian Crawford. He was learning the new dance at our regular practice day, and managed to stumble over Roger's shoe. Result? Twisted ankle and intense agony for two months. Scratch one Crawford.

Next it was the turn of Colonel Clark. Tony went off on a skiing holiday, and made one error. After lunch, he picked up an identical set of skis to his own, but which had one radical difference - they were made for someone with larger feet. Result? Highly complicated fracture of the hip and an iron bar through the whole bone to keep his leg together. Very nasty. He is still out of action.

Subsequently another good friend has developed a nasty illness, which is now thankfully gone - but he's still out of action and recovering.

So, three down. But my little Ridgeback hasn't run into me again recently, so I entered Chagford feeling confident. I shouldn't have.

Tinners' Morris dancing at Chagford; I'm on the far right, with my back to the camera

You see, the dance we had learned was a new one with a radical difference. It is a dance not with sticks, but with iron bars. We each have two bars, both one inch diameter, both about a foot long. And they are heavy. We dance forwards, then clash these things to the sides - and if you judge the clash correctly there's no problem. The weight of the darned things means that you have to be careful, so that when you clash, there's a slight give in each other's hands. It's all technique. But at several points, you are expected to clash with both bars simultaneously, with the dancers on your left and right.

That's where the problem lay, you see. I was happily dancing away, as I do, when I clashed to left and right, and felt a rip in my left forearm. My partner was a little farther away than I'd expected, so my muscles attempted to brake the movement without support - and boy, did it (does it still!) hurt. Still, I can dance the bar dance, so long as I can hold my hand still and let someone else clash with me. Much easier.

And in the midst of our tribulations and pains, we have been fortunate to acquire a replacement. Our youngest member, Jon, has taken over from some of the others, and he is very good. The young can learn things we old farts tend to find a trifle tricky - or painful.

And that is about it, really. It's so far been an enormously busy year. Now I begin the tour of the bookshops in Devon, next week travelling up to London and doing some shops there, and over the next months I'll be covering Wales and cities as far away as Reading. Meanwhile I've got to write a new novella for Medieval Murderers V, which will be out in a year's time, and then get back to book 27 for the Templar series.

This is going to be a real fun one. I've already covered the problems with the King and Queen, and this next book is going to be studying the state of England during the "phony war" period before the invasion by Queen Isabella and her lover, Sir Roger Mortimer.

And for the keener readers among you, you will hopefully be glad to know that there will still be two more books after that. And next week I'll be discussing the future of the series with my Editor, Martin.

Some years ago I was informed that no series could extend beyond about eleven titles. The author would "run out of steam" I was told. Ha! With mine, I can see it running all the way to the beginning of the Hundred Years War.

More recently I had a slightly alarmed email from an American fan of my books, who pointed out that Baldwin was growing rather old. Surely he would soon have to fall off this mortal coil if I was going to be authentic about his age.

Well, Baldwin is now about fifty. He is certainly already older than the average peasant of his period. However, not everyone died as they reached thirty or forty. Not long ago I was in Crediton Church. While there I saw a tomb, and wandered over to study it in more detail. It was a knight with his wife. Sir John de Sully was a noted warrior of his time. He died in 1387 at the age of 106. Yes. 106. There are plenty of records (for more on him look at Crediton Parish Church web site). So don't panic. There's the potential of a lot of mileage from Baldwin yet. Mind you, he'll have to be careful of his arthritis.


And on that happy note, many thanks to all of you who've kept in touch. I am very sorry to have taken a while about responding to emails, but it is still my aim and intention to reply to anybody who writes to me. I wish all of you all best fortune in the rest of 2008, and hope that the credit crunch, oil prices and gloom in the economy do not hurt you. And if the modern world seems ever more worrisome, well, I know a perfect escapist book to read!