Well, the last few weeks have been hectic as anything. Finishing one book in the last weeks of September, while trying to fit in a short tour of the west country with Medieval Murderers, and then I was off to the USA and Canada for a brief signing tour and visit to the Bouchercon festival in Toronto.

It's good to get to meet so many readers while off on these little trips, although it does take it out of you, wandering about the continent with one large case in tow. Luckily this year I was hitched to an expert in travelling about the States. For the second year running, the Jardine/Jecks tour was formed. You haven't heard of us? Well, think of the great double acts: Little and Large; Morecambe and Wise; Laurel and Hardy; Butch Cassidy and the Sundance Kid... there were times when I was reminded of the last scene there, but only a few times. 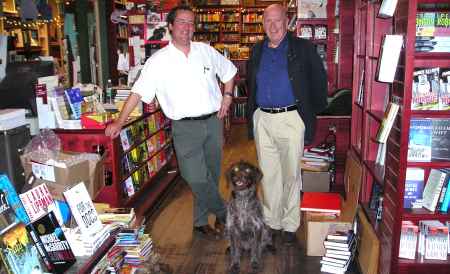 Quintin and me at Murder Ink with the scary dog.

Quintin Jardine is a great character and excellent writer. Go to www.quintinjardine.com for more information on his gritty Edinburgh Police stories starring Skinner. And then keep an eye open for when he's going to be in your town, because he's a brilliant speaker.

And excellent company. All through New York and Boston, he maintained my sanity (at the expense of several brain cells) and showed me the sights before depositing me safely in Toronto.

This is a beautiful city. I overheard one couple saying - "It's just like New York, but without the nasty stuff"! We had great fun there, especially with Ruth Dudley Edwards, Caroline Carver, and Barbara Nadel, who were all keen to see as many bar interiors as possible. Sadly they forced Quintin and me to join them.

Finally, off we went to Ottawa by train - much easier than flying - and had a great time up there giving our final talk to a fantastic audience at the National Library. Great fun - although we were alarmed to learn that most restaurants had closed by the time we finished. Famished, we wandered the streets of Ottawa until we found a friendly pub and got some steaks inside us.

Since getting back I've been trying to get back into the habit of work. It's been hard. First there are two young kids, then there's the Bernese Mountain Dog puppy, and I've got to cut back the hedge as well - it's a hundred yards long and about twenty feet above the road, so this isn't a minor operation. At the same time I'm in the middle of decorating the house.

Since I'm Chairing the Crime Writers' Association this year, there seems to be hardly a single spare moment.

This is the busiest time of the year for the CWA, too, with all our efforts going into trying to organize the main awards lunch, sponsored by the Mystery and Thriller Book Club. We give out a series of Dagger awards each year, for the best of fiction and non-fiction writing, and although it may seem an easy job, it's incredibly hard to pick a set of winners and treat all entries fairly and objectively. I don't envy the judges their work. It must be incredibly hard.

It's not much easier for the CWA Committee, either, with all the arrangements for issuing tickets, sorting dietary requirements, making sure all the prizes are there on the day, and the cheques, as well as all the other details which can mean the difference between a huge success and a disaster. So wish us luck on the 9th November!

I've been contacted by the BBC, who are going to interview PD James on her work. The message reads:


"Basically, we want any questions from crime writing fans, from all around the world, to put to P.D. James about the novel Original Sin. Interested people can email them at or can telephone +44 (0)20 7557 1619 to tell me their question. We might well be able to record people live on the programme asking their question directly to P.D. James, if they give us their contact details."

If you want to send in a question, please contact Ursula Smyth at the email given.

I hope you liked this little email, but of course I have an ulterior motive in sending it! If you like my books, you'll be happy (I hope) to hear that The Tolls of Death is now available in paperback (from Amazon), and the next hardback, The Chapel Of Bones, is out on December 6th.

Chapel Of Bones was great fun to write. It's one of the latest of my books to follow a genuine historical event: the murder of Exeter Cathedral's Chaunter, Walter de Lecchelade. He was set upon by a gang in the Cathedral Close a little after Matins one morning, so probably about two in the morning. And as a result there was a dreadful revenge taken on Exeter itself... but I'm getting ahead of myself. You'll want to read it yourself, won't you?

And for those who really really like my books, you'll be happy to hear that next May there will be another called The Butcher Of St Peter's, and I'm already working on the book to follow that, the twentieth in my series.

It's sometimes a little shocking to realise that I'm almost of age now. After a decade of writing the Templar series, I've nearly got to my twenty-first novel.

Quintin likes to mention that he beat me to that some while ago - he's on his twenty-fourth now, I think - but then, he is a lot older!

Thanks for reading this, and all best wishes.

I have to give huge thanks to a number of people - especially Ramsey and Janice for a wonderful Thanksgiving lunch that filled me for two days!

Me, with Ian Rankin and Kim McArthur

In addition, thanks to Peter Newsom of Headline for signing the cheques, Deborah Sloan of Trafalgar Square for the US side (and I'm glad the Red Sox won at last!) and Kim McArthur and her team for all their help in making the Canadian tour so successful.

Thanks also to Al Navis for his organising abilities, Patricia Pederson for her help with the Meet The Brits, and the CWC.

And then there were the shops: Cloak and Dagger, Princeton; Mysterious Bookshop, NY; Partners & Crime, NY; Murder Ink, NY; Kate's Mystery Bookshop, Cambridge, Mass; and Prime Crime Books and the National Library of Canada in Ottawa. All have signed copies of my books, so go there soon before they're all sold out!

Most of all, Thanks to Quintin and Eileen for the companionship, the laughs, and the hangovers!